Hemantha Vithanage mentioned that he filed an RTI application and received the information on contents in the containers of the sinking ship. That information raised many serious concerns regarding the ship. The information revealed that many hazardous chemicals such as nitric acid, methanol, sodium methoxide copper, lithium iron battery  and polyethylene are in the containers.

Government should look into the livelihood issues of the fishing community- There are possibilities that the fishes which we will buy after 5 years can be poisonous fishes. It is not possible to identify the fishes which have eaten these chemicals. Therefore fishermen can’t identify the fishes which are good for consumption. This will affect their fishing and selling. There is a variety of polythene inside the containers. It will take 500- 1000 years to demolish. These will severely impact the environment.

A Fundamental Rights application was filed with the Supreme Court of Sri Lanka seeking an order be made on Ports & Shipping Minister and relevant officials, to conduct a special investigation on how the sinking X-Press Pearl container ship entered Sri Lankan waters. Myself on behalf of Center for Environmental Justice and several fishermen filled the FR application. Sri Lanka is a signatory party to the The International Convention for the Prevention of Pollution from Ships (MARPOL). Therefore there are chances to seek remedies under this convention. 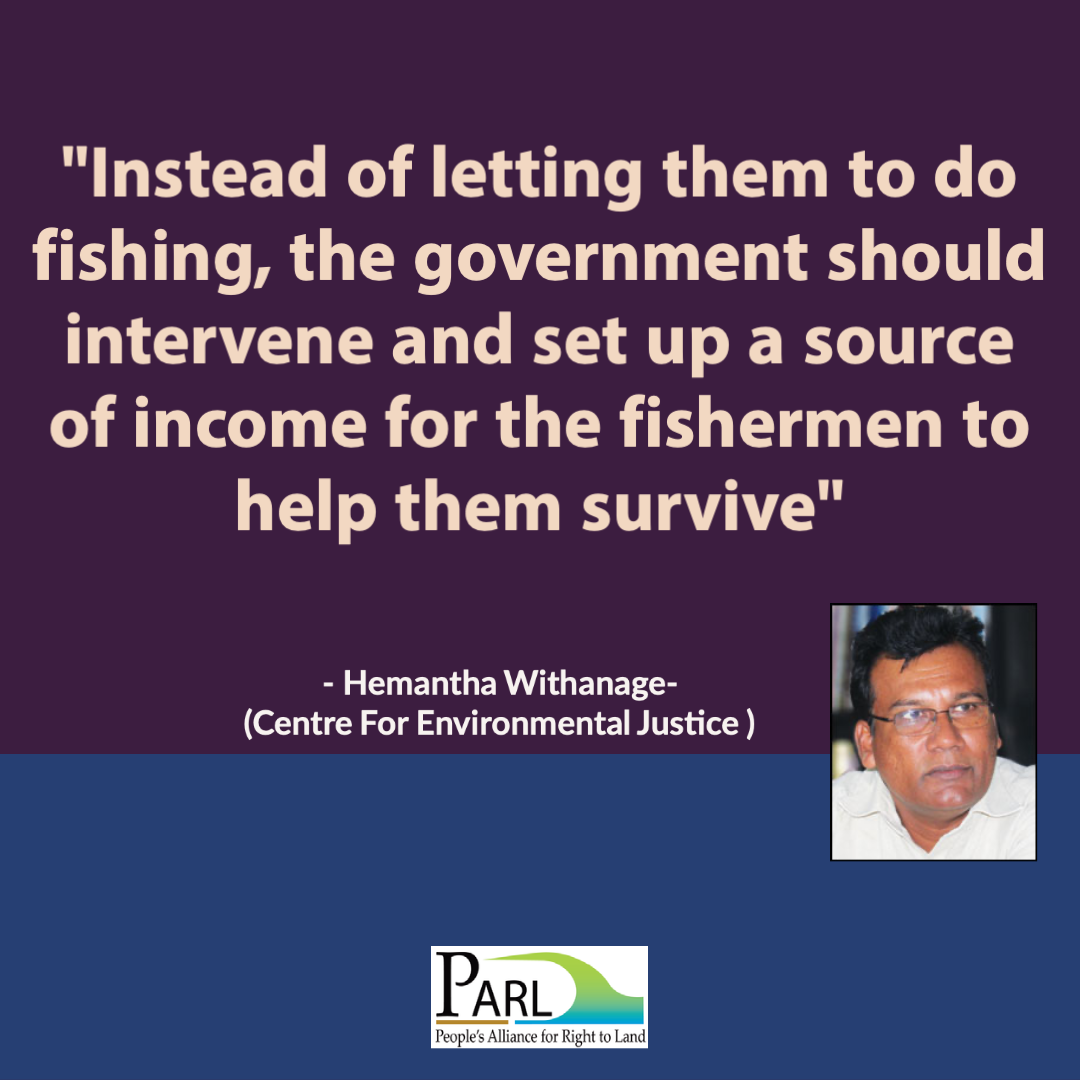 "Instead of letting them do to  fishing, the government should intervene and set up a source of income for the fishermen to help them survive"

“We had to pay a heavy price to save the ship's crew. These costs are more serious than we think. We had a country with a clean coastline. Tourists come to Sri Lanka to see a clean beach . Eat clean food. Fish, prawns, crabs. When all this is lost, there will be a huge long term loss”

1. Scientific research should be conducted with the engagement of university students and scientists in Sri Lanka.

2. Reasonable compensation should be given to the fishing community 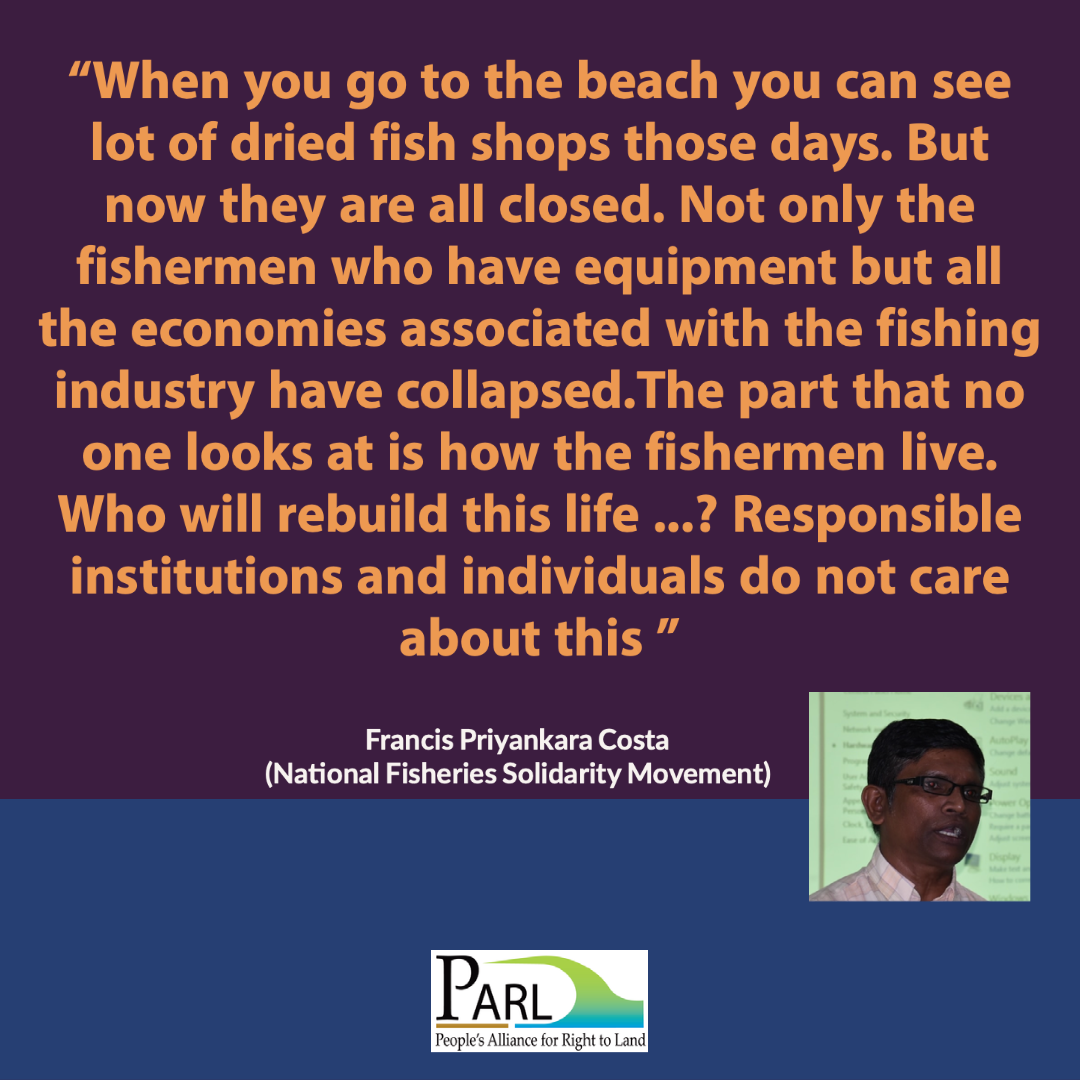 "The shallow zone where small-scale fishermen are fishing can be  completely destroyed. The four districts of Kalutara, Colombo, Gampaha and Puttalam have been most affected by the ship"

"When you go to the beach  you can see many dry fish stalls.But today they are all closed. Not only the fishermen who have gear but all the economies associated with the fishing industry have collapsed by now”

“The part that no one cares about is how the fishermen live. Who will rebuild this life ...? It's been a month today. Who wants to build the lives of these people? Responsible institutions and individuals do not care about this ”

"What the media is saying… They say there will be no major environmental damage from the ship.But nobody cares about the fishermen, the fisherman's life, how the fisherman lives, how they eat and drink ”


There are recommendations in the  PARL  report (Under section  8 (Land and livelihood) and 9 (Environmental protection) related to this issue.

He noted that not only fishing societies; all citizens, NGOs and government organizations should support this issue.
Proposed recommendations

1. There are fishers who haven’t registered themselves officially. They should register themselves to get compensation or aid from the government in future.

4.  PARL can raise  awareness on the issue by bringing the Voice of People through peoples’ networks on ground.

“Even after catching fish, people are now afraid to eat fish. When this happens, it is said that there are dead fish now ... If the sea is damaged, we think that our house is also damaged ”

"No one even listens to the stories of innocent people like us. The media says there is no harm in eating fish. There is no damage to Negombo Lagoon. But we do not live a life as the media says. When I try to go to work I am not allowed to go to work. When it comes to catching fish, there is no way to sell it.We are living with children at home facing  many economic problems ”

"They say they are giving Compensation. It is being talked about in the media. But it is very difficult for us to live at home ” 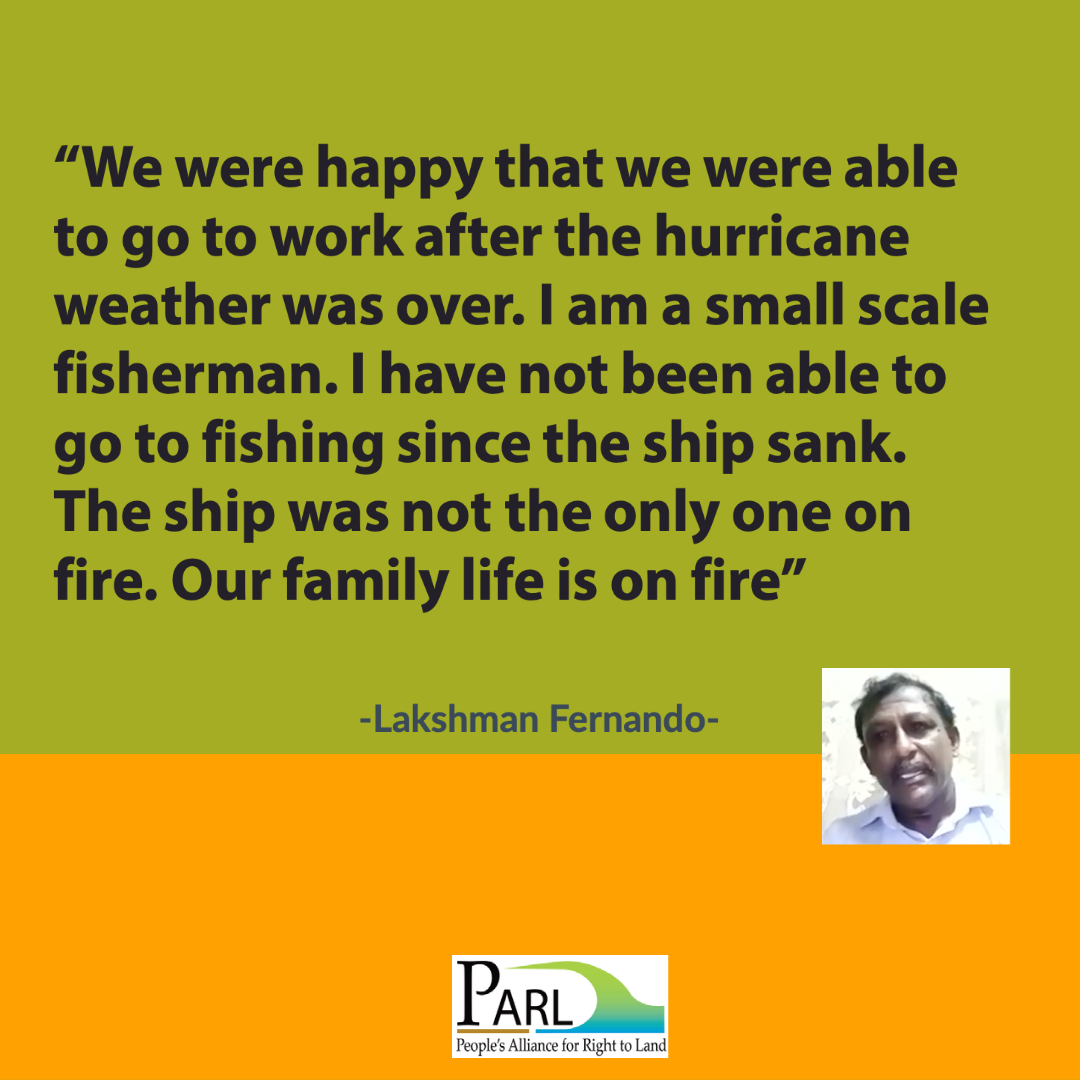 “We were happy that we were able to go to work after the storm was over. I am a small-scale fisherman. But I have not been able to go fishing since the ship sank. The ship was not the only one on fire. Our family life is on fire ” 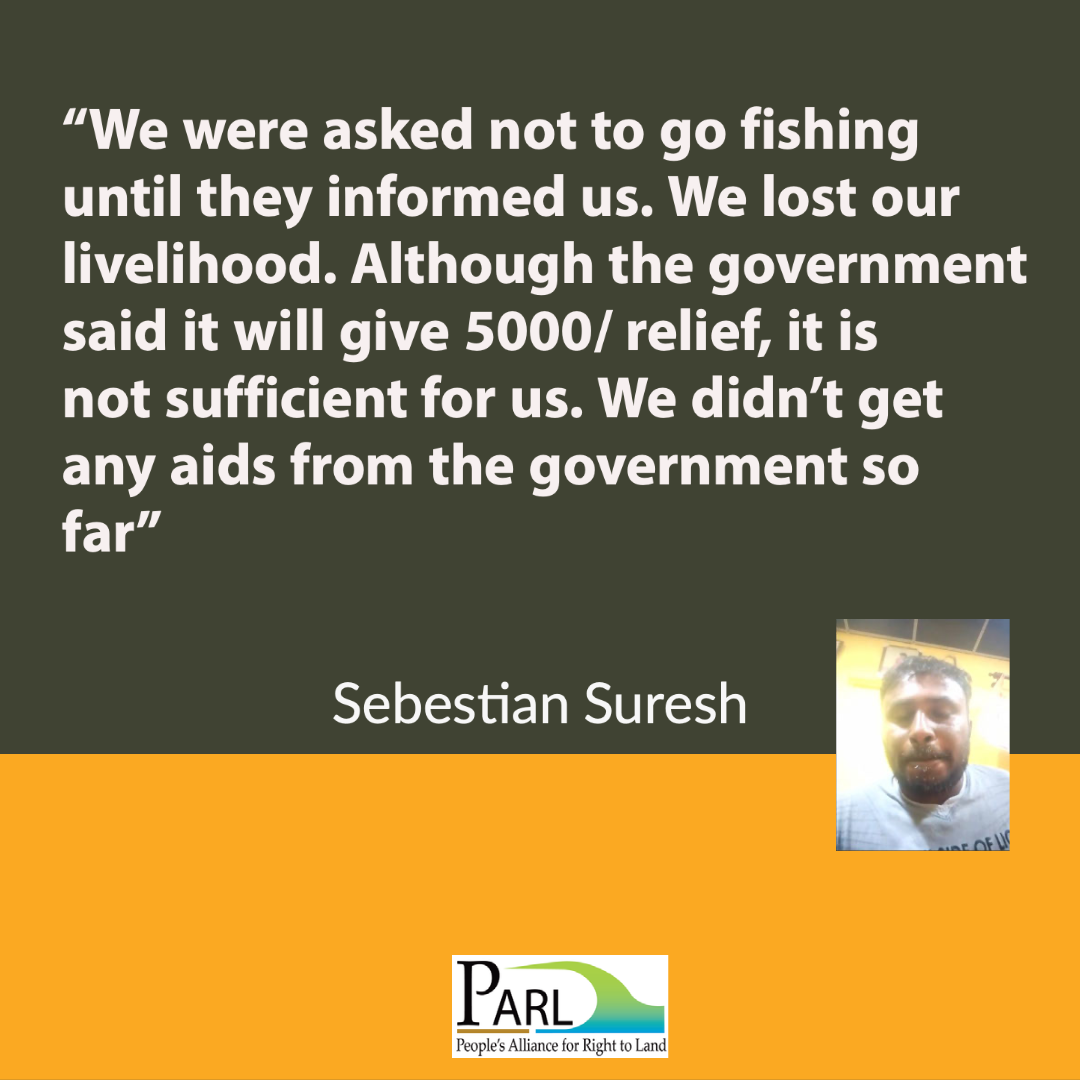 “We were asked not to go fishing until they informed us. We lost our livelihood. Although the government said it will give 5000/ relief, it is not sufficient for us. We didn’t get any aids from the government so far”